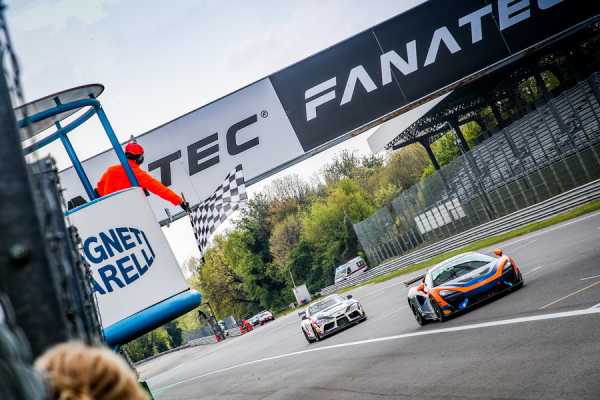 United Autosports secured a double win on their return to GT racing this weekend, after Bailey Voisin and Charlie Fagg claimed two superb victories in the opening round of the SRO GT4 European Series at Monza, Italy.

For the first race of the GT4 European Series, the #23 McLaren 570S GT4 car started fourth on the grid, after a great qualifying performance by Bailey earlier in the day. A brilliant race start from the 18-year-old, meant he made up a place to sit third within the first lap. A long stint under the safety car meant the driver change and strategy call needed to be executed perfectly. A brilliantly timed driver change saw Charlie bring home the #23 to claim the win. The win all the more impressive for Bailey, who was making his debut in senior racing.

Car #32’s pairing of Gus Bowers and Dean Macdonald had a starting position of ninth in race one. A great start from Gus saw him make up three places to run sixth within the first lap. Both Gus and Dean maximised the car and their performance, resulting in a third-place finish in the Silver Cup class and a double podium finish for United Autosports in the first race of the season.

In the second qualifying session, Dean set the absolute fastest lap of any GT4 car over the whole weekend, resulting in him achieving pole position for the #32 car for race two. The #23 car also had a great qualifying session, lining up in third place. However, a retirement due to a collision in race one saw United Autosports promoted to second place, ultimately locking out the front row of the grid.

Charlie started race two in the #23 and drove a brilliant race, managing the pack under two safety cars periods and handing the car over to Bailey to brilliantly defend the lead and bring home a second race win for the #23 crew.

Unfortunately, due to a race start infringement, Dean was handed a 10-second time penalty, which he had to serve once the safety car had come in, dropping him and Gus down to 11th. Once behind the wheel at the mandatory driver change pit stop, Gus Bowers pushed hard and made a fantastic recovery to drive the car across the line to finish fifth in the Silver Cup class.

The second round of the SRO GT4 European Series will be held in Paul Ricard, France on 28-30 May.

“It’s been an absolutely brilliant weekend, I couldn’t ask for much more. Two wins at Monza is pretty special. A big thank you to everyone at United Autosports for everything they did over the course of the weekend.”

“A great weekend. I would like to say a massive thank you to McLaren for building such a fantastic car and United for running it perfectly over the whole weekend. A great job by my teammate Bailey as well in his first senior racing weekend.”

“The first race was crazy, starting ninth and finishing on the podium was brilliant. The second race was tougher, due to a race start miscommunication, but it was good fun and an overall good place to finish. A great start by the team, everyone worked super hard so to get a podium in the first weekend is a solid result. Thank you to the team and McLaren. Let’s look forward to the next round.”

“Overall, we’ve had a great weekend, some good points for the championship.  We had a good result in race one to finish third on the podium. In race two we expected a bit more but that happens sometimes. The team did an amazing job all weekend, the car was brilliant throughout each session and I can’t thank them enough.”

“I think it’s fair to say we have had an absolutely fantastic start to our GT4 European Championship. All the drivers and team have done a brilliant job in their first race weekend together. The pace was great in qualifying and both cars’ performances were exactly what was needed. For Charlie and Bailey to get a double win in both races was amazing and a third in the Silver Cup class for Gus and Dean in the first race was a great start to United Autosports season in GT4 racing.”