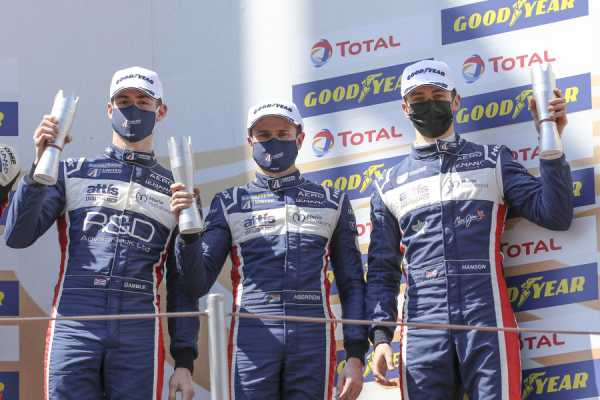 United Autosports finished the opening round of the 2021 European Le Mans Series on the podium after the #22 Oreca 07 of Phil Hanson, Tom Gamble and Jonathan Aberdein finished third in Barcelona, Spain.

The new for 2021 trio started the race sixth, with Phil Hanson making a fantastic start to be running third by the end of the first lap. Both Tom Gamble and Jonathan Aberdein, who were new to LMP2 racing, also showed great pace to hold onto third for the majority of the race, with Jonathan bringing the car across the line to take the final podium spot of the race.

Nico Jamin, Manuel Maldonado and Job van Uitert had a disappointing start to the season in the #32 Oreca 07, finishing ninth after a spin on the first lap for Nico Jamin. Getting caught out on cold tyres at the start, Nico ended up beached in the gravel, which caused an early safety car to rescue the stranded Oreca. Once recovered and racing again, Nico soon caught up to the back of the LMP2 field before handing the car over to Manuel Maldonado for his first LMP2 racing laps. Also showing good pace, Manuel kept the car out of trouble to hand it over to Job van Uitert for the final part of the race. The trio ultimately crossed the line in ninth, but showed they have the pace to be much further up the order next time out.

The LMP3 team had a successful Saturday, with the #3 Ligier JS P320 of Duncan Tappy claiming pole position. Starting from pole, Andrew Bentley had a difficult first stint, struggling with the pace of the car from the beginning – something his teammates Jim McGuire and Duncan also experienced. A solid stint from Jim meant he handed the car over to Duncan for him to finish the race, crossing the line 10th.

The #2 2020 ELMS LMP3 championship winning car fared less well over the course of the four-hour race. After a brilliant start by Rob Wheldon, moving from third to take the lead on the first lap, the #2 hit trouble during the first pit stop as Rob tried to restart the car to leave the pits for his second stint. Unfortunately the car needed to be pushed back into the box so the team could replace the starter motor, dropping them way down the order and out of contention for the win they had the pace for. Edouard Cauhaupe on his ELMS debut drove a great race before handing over to Wayne Boyd who brought the car home in 13th place.

The next round of the European Le Mans Series will be held at the Red Bull Ring, Austria on 14-16 May. The next race for United Autosports is the opening round of the FIA World Endurance Championship at Spa on 29 April – 1 May.

“Not a bad first result for us. Obviously, I hoped for a bit more coming into the pits in second after my first stint and running strongly. I don’t think we had the pace against the other guys. I think we have a bit of work to do in terms of the whole crew and everything involved being up to scratch, but at the same time we won the championship from a third place in the first round last year and we have scored some decent points. Coming into the weekend, if I knew we were going to end up with third place I would have been quite happy so it’s definitely not a bad start but room for improvement.”

“It was a difficult race and we tried a few things on strategy. My second stint was good, but I’m really happy to be on the podium and at the end of the day it is points towards the championship and hopefully we can go away and build on this and come back stronger for the next one.”

“I’m very happy with a podium in our first race of the season. It wasn’t a perfect race from our side but it’s probably a good thing to be disappointed with third. We know we can do better so I think we are in for a tight fight this year.”

“I think the pace was really good, so let’s review everything and see where we need to improve and make sure that in Red Bull Ring we are where we want to be, which is at the front. I think we showed that the car is capable of driving at the front. At the next race we will drive at the front again so let’s stay positive and work towards that.”

“I think we have to take the positives from the weekend. We have learned a lot. I think the pace is good between the three of us. There was a small mistake at the start but it can happen to anyone. We will move onto the next one and hopefully will be where we deserve to be. We just need to keep our heads up and look forward to Red Bull Ring.”

“I’m sure we will have to analyse the race but it wasn’t the way we wanted to start the season. I got caught out at the start with the cold tyres. The warm up lap was really slow and I couldn’t get any heat into the tyres. It’s no excuse but I spun and then was stuck in the gravel. I think the pace was good. We definitely had the pace to fight with the #22 for the podium, but by the end we were a lap down so we finished ninth. It’s not the start of the season we wanted and I’m very sorry for my teammates and the team, but we will hopefully bounce back at Red Bull Ring.”

“I’m a little bit disappointed with this result but we can be happy about our week here at Barcelona. We have really strong pace and the next race at Red Bull Ring we will do our best to recover after this bad result and we will do our best to win. If we can do the same weekend with the pace we have then for sure we can win the next race. Thank you to United Autosports and my teammates Rob and Wayne for a great first weekend.”

“A difficult race for us. Rob got off to a fantastic start and on strategy we looked good and then we came in for the pit stop and we had starter motor failure which is bitterly disappointing. Big thanks to the boys for getting it fixed as fast as they did meaning we could get out there and show the pace we had to win the race. At least we can take that away with us to the next race. Thank you to United Autosports for all their hard work over the last two weeks. We will move onto the next one at Red Bull Ring.”

“Disappointing in some respects. The pace was there and we definitely had the pace to win. We have a race winning line up and without the issue we had, we would have definitely been in the hunt for the win. Now we just need to go on and win the next race!”

“We love racing Barcelona, it may be one of my favourite circuits but it is certainly not our luckiest. We didn’t have the pace in the race to match our qualifying pole position. The Red Bull Ring cannot come around quickly enough for the #3 car to get back to the front of the grid.”

“Pole position is the real positive out of this weekend and it was really cool. I was really happy I could do that for the guys. The race was a tricky one. For whatever reason the car wasn’t in the sweet spot. The tyres dropped off a lot but it’s something we will work on for the rest of the season and see if we can build on it.”

“That was a really tough race for us. I think we all struggled for pace. We started on pole position, which was a great effort from Duncan so I think we all had high hopes, but from the first lap I felt that the car wasn’t underneath me and I struggled to keep anyone behind. I went into damage limitation mode and tried to stay out of trouble. I had a few bits of contact from behind but it didn’t seem to affect the car’s performance too much and I could hand a relatively clean car over to Jim. From there we didn’t really make the progress we were hoping to. We will come back stronger at Red Bull Ring. I’ve never been there so I’m looking forward to learning the circuit and hopefully we can our pace back.”

“A great result for the #22 car, finishing on the podium in Barcelona and a great pole for the #3 car yesterday. I’m sure the team will work on the issues we had during the race and be back stronger at Red Bull Ring.”

“The #22 had a good result today and I think they will be fighting for wins throughout the year as they should be. The #32 had a mistake early in the race, which put them out of contention early on, but they will come back stronger and showed the pace they have as a driver crew. The LMP3 team was incredibly unlucky with the starter motor failure. They were on course for the race win, and it is a shame they have started their championship defence this way. And the #3 crew had a tough time with the car, even after Duncan’s great pole position yesterday. Still, things to work on and we look forward to the next one in Austria.”