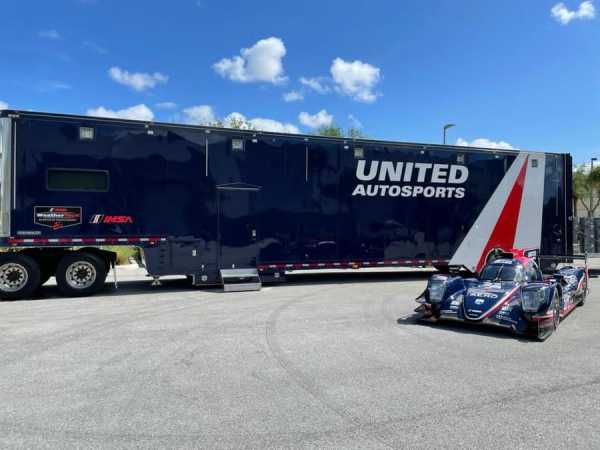 United Autosports are preparing for round two of the IMSA WeatherTech SportsCar Championship at Sebring, Florida this weekend (19-20 March).

The Mobil 1 12 Hours of Sebring is the second race on the IMSA calendar, but the first of 2021 for United Autosports LMP2 team, who travelled to America last weekend for a week of preparation at their base in West Palm Beach, Florida.

Jim McGuire, Wayne Boyd and Guy Smith will team up in the #22 Oreca 07 for the first time, with Guy making his United Autosports debut. The race in Sebring also marks the first time Jim McGuire will race a United Autosports LMP2 car, having competed with the team in LMP3 for the last four seasons. Wayne Boyd raced for United’s LMP2 team in 2018, but is better known for his LMP3 success, having won both the 2020 European Le Mans Series and the 2021 Asian Le Mans Series LMP3 championship titles.

This weekend marks a return to IMSA competition for United Autosports, having previously entered three rounds in 2018. The team finished fourth at the Rolex 24 at Daytona, fifth at the 12 Hours of Sebring and fourth at the 6 Hours of Watkins Glen.

Watch qualifying and the race live and uninterrupted on IMSA.TV.

“I’m mega excited to get to run the Sebring 12 Hours with United Autosports in the Oreca 07 LMP2 car, sporting the magnificent team colours and the AERO livery. To be driving with Wayne Boyd and Guy Smith is also really fantastic, they will be great teammates. I’m really looking forward to a positive result. I can’t wait.”

“I’m really excited for Sebring. It’s a race I’ve always watched and I’m delighted to now be able to take part in. I’m looking forward to being back in the LMP2 and in particular a United car, with all the success they had last year we have no excuse not to come away with a good result. I’ve raced at Sebring a couple of times and it’s a circuit I enjoy, very different to any circuit we race in Europe. I’m also, really happy to be sharing the car with Jim and Guy. Both great drivers and personalities so it should be a fun week.”

“I’m really excited to be racing at the Sebring 12 hours again. It’s been a few years since I last raced there but without doubt it’s probably the best race on the American calendar. It’s one of the toughest races in the world and it’s very physical, very tough on the car but that’s what makes it such a challenge. I’m excited to be returning with United Autosports in the LMP2 class and I’m excited to drive with Wayne and of course Jim, who I have known for many years. I’m looking forward to the challenge and don’t underestimate it but hopefully if we can have a clean run, we can find ourselves on the podium. I’m looking forward to being back.”

“I’m looking forward to seeing how the team get on in America this weekend. We had a good race there in 2018, so hopefully we can do the same, if not better, this weekend.”

“I love racing in America. It is totally different to anything we do in Europe, so that brings an added excitement to the weekend. We have been out in America prepping the car and all our equipment ahead of the race in Sebring and I’d like to thank everyone at the Hangar Group in West Palm Beach for making us feel welcome and helping us set up our base out here. I’m hopeful of a good weekend with Jim, Wayne and Guy.”

BUILDING and WRECKING my S14 240SX in 10 Minutes! *AMAZING TRANSFORMATION*