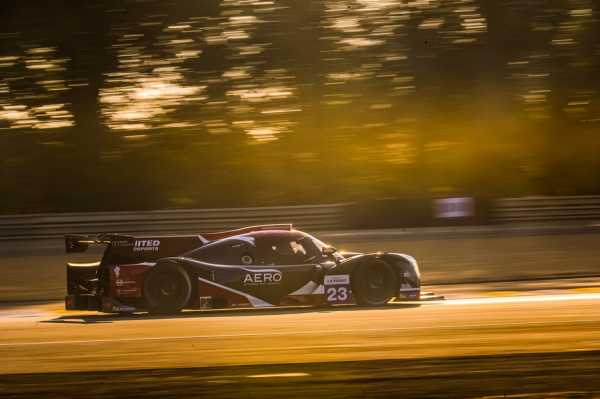 United Autosports scored a pole position and three top-10 race finishes in the Road to Le Mans weekend after Wayne Boyd scored his third pole of the year for the opening race of the event and, alongside team mate John Schauerman, finished fifth at the end of race one

The #24 crew of Daniel Schneider and Andy Meyrick finished race one in fourth and race two in 11th, while Jim McGuire and Duncan Tappy finished ninth in race two, but 13th in race one. Shaun Lynn and Joe Macari finished 17th and 16th in race one and two respectively.

The next round of the Michelin Le Mans Cup will be held at Monza in Italy on 9-10 October.

United Autosports started the opening race of the Road to Le Mans race weekend from pole position after a stunning lap by Wayne Boyd earlier in the day. Jim McGuire started race one from 13thin the #22, while Daniel Schneider began eighth in the #24. Shaun Lynn lined up 18th in the #25.

On the opening lap, an LMP3 car had a coming together with a GT car and brought out the first slow zone of the race. Wayne maintained his lead, while Daniel dropped to 10th, Jim to 15th and Shaun to 19th. Once full speed racing resumed, all four of our Ligiers got into a race rhythm. With seven laps to go, Jim pitted the #22 to hand the car over to Duncan Tappy, while Daniel pitted to hand the #24 over to Andy Meyrick. A lap later, Shaun pitted the #25 and handed the car over to Joe Macari, while Wayne pitted from the lead and handed the #23 over to John Schauerman.

Unfortunately the speed of the pro drivers who were chasing John, got the better of him, however he hung on brilliantly to finish sixth after being passed by team mate Andy Meyrick on the final lap. Andy finished fifth, while Duncan battled back to finish P14, with Joe finishing P17.

After the race, each of our cars were moved up one spot in the standings after post-race checks. Meaning Daniel and Andy finished fourth, John and Wayne finished fifth, Jim and Duncan finished 13th and Shaun and Joe finished 16th.

Race two began behind the safety car after a huge amount of rain fell overnight making the track incredibly wet. After two laps, the safety car came in and the race began.

Unfortunately with seven laps remaining, Wayne had contact with another LMP3 car while making a move to overtake, which caused race-ending damage to the #23. After battling back through the pack, Duncan brought the #22 Ligier home in ninth, while Andy Meyrick finished 11th in the #24. Joe Macari crossed the line 16th in the #25 after a couple of fun races for him and Shaun.

“Race two was significantly better for Duncan and I than race one after the electrical issues we had which was a big challenge, but I think we fought as hard as we could given the less than ideal conditions and finished with a top-10, a P9 finish. I’m very pleased with the result considering and we had a great time. It’s always fun to be with United Autosports and its always epic to be back at Le Mans.”

“It was great to be at Le Mans with United and Jim this weekend. Unfortunately qualifying didn’t quite go to plan and we were unlucky with a red flag and track position. The electrical issues we had in race one hampered us, but race two was a really fun race in mixed conditions. Jim had a really tricky start to the race but brought it back to the pits in a really strong position and the pace was also strong. Monza will be a similar aero balance so I think we are in a good position to be really strong for our next race in the ELMS.”

“I’ve had a great weekend at Le Mans. We had a good result in race one, with Wayne’s dominating performance, pole and kept the lead his whole stint. The second race was tricky with the drying track and then the contact at the end that did not allow us to finish. It is just an awesome place to drive and kudos to the team for providing an excellent car.”

“We had a disappointing end to our weekend with a DNF in race two. I was fully down the inside and the other driver didn’t see me, turned in and damaged our car forcing us to retire. On a positive note, I’m really happy with my pole position. John’s pace in every session has been MPA and we had a great first race with a fifth place finish. We’ll go to the next round at Monza pushing for that podium.”

“I was fortunate to drive a United LMP3 car at one of the greatest tracks in motorsport. It’s difficult to put the feeling into words. Our first race was very good and we just missed out on a podium again, but we will get back there again I’m sure. I will definitely be back at Le Mans next year.”

“To come away so close to a podium on our first attempt at Le Mans is fantastic and shows progress we’ve made. Daniel did a fantastic job to come here and deal with all the difficulties and challenges that Le Mans faces a rookie with and he drive brilliantly all week. I’m really happy with the job that he did and now I can’t wait for Monza.”

“It was really fun to be back with United Autosports and to race at Le Mans. Joe and I have had a good weekend. While we were there to have fun, once you get in the car, the competitive side takes over and we obviously wanted to do as well as we could. Joe has never raced an LMP3 car and I haven’t been in one since Abu Dhabi last year but it was as always, a great experience.”

“It was great to be able to watch both Road to Le Mans races here in Le Mans. I was delighted for Wayne grabbing pole position for the first race. He and John had a good race and along with Daniel and Andy, scored some valuable points for the championship. It was good that Jim and Duncan could join us from our ELMS team as well as Shaun Lynn and Joe Macari, racing with us as a one off.”

“Another pole position for Wayne at the start of the Road to Le Mans weekend started the event off well. Wayne, John, Daniel and Andy scored some good points towards the championship and I’m pleased Daniel and John enjoyed racing at Le Mans. Jim loves Le Mans too, he and Duncan had a tough weekend but it was good track experience ahead of the next ELMS race at Monza. It was, as always, a pleasure to have Shaun Lynn with us again. Joe Macari also fitted into the team well and I’m glad they had a good weekend with us.”

DODGE NOW TAKING ORDERS THE MOST POWERFUL SUV EVER

Giving my Best Friend MY E30!