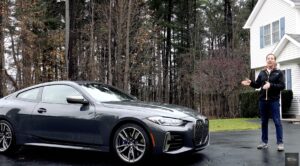 BMWs legendary three series sport sedan long ago set a benchmark all of its competitors strived to achieve. And whether you’re a 4-door or coupe aficionado the car still holds a special place in the hearts of driving enthusiasts.

This week I’m spending time with the next generation M440i. 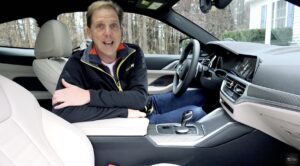 The 2014 model year saw the coupe leave the 3 series nest for its own designation, receiving a 4 in front of it for what BMW described as a 3+1 experience; alluding  to the fact that you were getting something more with 2 less doors.  And compared to the new 3 Series Sedan, this Coupe is longer, lower and wider.  And those differences grow even larger when you put it side by side with the previous gen Coupe – this one is over 5” longer. 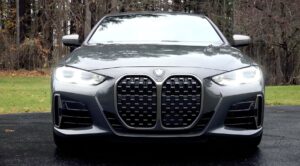 A 2-door model needs to bring the sexy and it has to have an exciting drive and this 2nd gen 4 Series inarguably has the latter part of that equation covered.  Whether it’s sexy or not is in the eye of the beholder, but more about that in a bit. 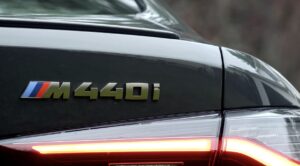 This here is the highest non-full M model; the M440i with xDrive as standard.  MSRP starts at just under $60,000.  It’s a luxury performance car that delivers high levels of both attributes; it’s fast and fun while at the same time comfortable and techy. 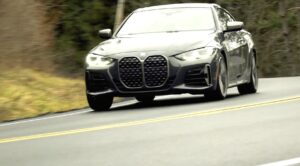 Its heart continues to beat with a 3.0-liter turbo-6 but one that yields significantly more; 382 horsepower and 369 pound-feet of torque, allowing it put away 60mph 3/10ths of a second faster, now clocking an eye-opening 4.3 seconds assisted by launch control. 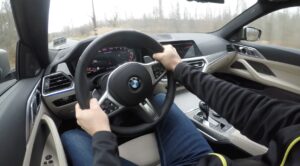 With an additional 48-volt battery providing mild hybrid technology, this car’s mixed metal makeup tallies an extra 150 pounds versus the previous model but it feels even more athletic.  With the benefit of extras such as the Adaptive M Suspension and High Performance Tire Pack, the M440i is a blast to drive with supreme road holding confidence, a cabin-infused with delightful sounds and the ability to rocket out of corners thanks to the M Sport Differential.  A double push of the Sport button takes you to into Plus and it’s this setting where the car truly earns its moniker “The Ultimate Driving Machine.” 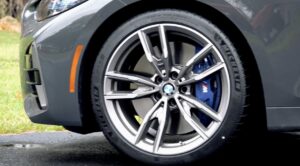 The 8-speed auto is incredibly smart so using the paddle shifters isn’t even necessary to keep the gearbox in the sweet spot.  The steering is quick and nicely weighted and the engine is extremely responsive, backed by some convincing sounds in the cabin and a chassis that’s willing to dance.  The windshield is squinty but the leather sport buckets with adjustable side bolsters allow you to find an agreeable seating position that sits you low, closer to the car’s center of gravity for a feeling of greater connectedness.  And there’s a head-up display to keep you focused on the road ahead.  As for the ride quality?  It’s exceptional no matter what mode you’re in.  Combined with a quiet cabin and a long list of modern comfort features, the 4 can happily play serene and composed.  Despite the additional power, the stellar gas mileage holds the line thanks to the mild-hybrid setup, earning 25mpg in mixed driving.

This beefed-up, turbocharged inline-6 is a stellar engine and readily flaunts its immediacy here thanks to its paring with the world’s best 8-speed automatic.  Combined with xDrive, the M Sport Differential, and a set of benchmark Michelin Pilot Sport 4S tires, control is never in question even on wet and gritty roads like these.  As the driver, you feel fully involved here just like a good sports coupe should.  I’m impressed with the combination of athleticism and luxury finesse making the 440i feel like a 2-for-1 deal. 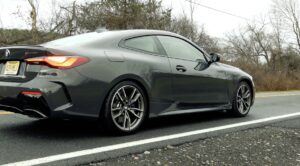 The car does feel long behind you now, otherwise this is a BMW that’ll have you searching for the long way home.  Now, should we talk about the grille? 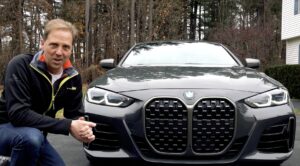 The new BMW kidney grille design; it’s the lowest hanging fruit in the world of automotive discussion.  Piling on has become a team sport where those who really dislike it go to great lengths to tell you so and those who kind of dig it are afraid to be left out of the cool kids club.  Where do I stand on it?  Somewhat muted as it is here on the 440i with its grey finish – it really doesn’t bother me.
But what does leave me wanting is the 4’s design in general.  Other than the front end, it can look a little anonymous from other angles, particularly in this gray paint. 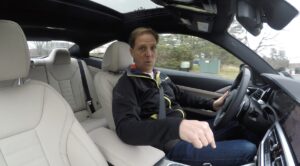 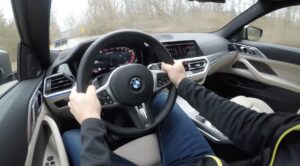 And with easy access and seats that are positioned low and deep, those relegated to the rear won’t be miserable, even getting their own climate controls and USB ports.  Like all new BMWs, the cabin is spot on and resounds with high tech and modernity.


If you’re down with the new styling, rest assured the rest of the 440i is going to make you very happy.