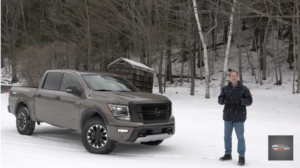 We all know who the key players are in the half ton pickup segment but I myself like to root for the underdog so the Titan has always been a favorite of mine. And now for the 2020 model year it receives some significant enhancements and one key omission.

When the 2nd generation Titan debuted in 2016 it brought with it a bigger brother known as the Titan XD replete with a diesel engine option.  Both trucks have been extensively redesigned for the 2020 model year but Nissan has axed the diesel, meaning both trucks are now powered by a beefed up version of the familiar 5.6-liter V8, rising from the 390 horsepower and 394 pound-feet of torque it used to produce to the respective 400 and 413 it makes now. 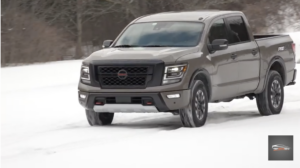 It also gains 2 extra gears so with the new 9-speed auto gas mileage improves by 1mpg on the highway.  But there is a caveat – Nissan now recommends premium unleaded for max performance whereas before 87 octane was just fine so annual fuel costs for this Titan actually go up by $550 per year.  But man – this is a beautiful truck powertrain with exceptional acceleration and linearity, an uncanny smoothness and the capability to tow 9,210 pounds when equipped with 4-wheel drive.  And would you listen to that exhaust? 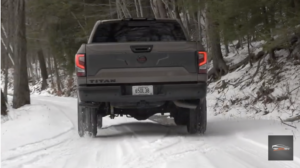 It sounds like it belongs on a V8 sports car.  It’s that good.  Unfortunately, the 4-wheel drive setup doesn’t offer an ‘auto’ setting in addition to the 4-high and 4-low ranges so when road conditions vary 4-wheel traction won’t just kick in.  Speaking of which, the trim I have this week is the PRO-4X which is offered exclusively in the 4X4, crew cab, short box configuration.  With a starting price of about $50k, this is the off-road-oriented Titan with all-terrain tires, Bilstein shocks, a rear locker, hill descent control and a skid plate up front. 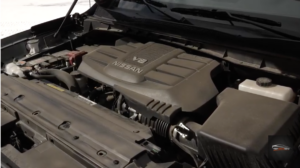 It wears lots of black and when fitted with the trio of available packages treats its occupants to a multitude of comfort and convenience features.  The list of extras is extensive but some of the highlights for me are the heated and cooled front seats, heated rear seats, heated steering wheel, remote start, the hard-hitting 12-speaker Fender audio system, and around view monitor which comes in really handy because this truck isn’t small. 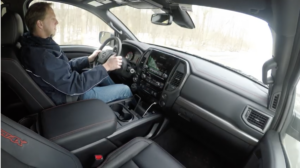 All told, it checks in at $58,455 – a number that no longer seems at all unreasonable in a market that is truck crazy. 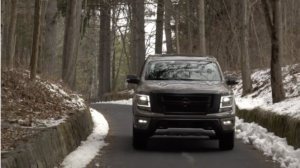 And the more I think about it, Nissan could largely ameliorate this issue if they would simply redesign some of the buttons and switchgear which date back to the 90s.  But the biggest offender in here is oddly the one you touch the most – the shifter – crafted of cheap-feeling plastic that engages with the flaccidity of a banana peel.  Otherwise, the leather looks great and the new command center is big, bright and high res with easy to use controls, integrating both CarPlay and Android Auto replete with a nifty phone holder.  The driver display is more primitive looking but includes good content like the updated off-road gauges.  Nissan Safety Shield 360 is standard on all Titans so you’re going to get blind spot warning, rear cross traffic alert, high beam assist and rear automatic braking among other safety features no matter which one you choose.  The refresh also includes 2 more air bags for a total of 8.  This PRO-4X model packs in even more including Intelligent Cruise Control and Traffic Sign Recognition. 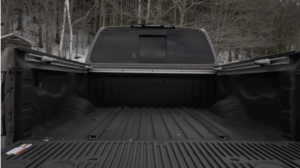 The updated body still has the Titan looking old-school pickup which isn’t necessarily a bad thing.  In Baja Storm it definitely grabs attention.  And I’m mighty impressed with these General Grabber tires which do an awesome job in the snow and ice.  But what really grabs me about the Titan is how well it drives…there’s a lot of precision engineered into this and it’s palpable.  Press the gas pedal and despite all the power the Titan gives you pinpoint control over how much you wish to unleash.  The steering is not truck-ish either and the ride quality is excellent.  Sure, there’s still some body wiggle when you cross the railroad tracks but by in large the Titan drives like a champ. 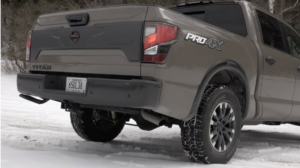 Where the Titan distinguishes itself is with its powertrain and it precise controls. I mean this engine is V8 perfection with gobs of power and the kind of sounds you want to hear. And the highly engineered throttle control puts the driver in complete control so you feel like you can precisely control the action with your right foot. The steering, braking and off-road traction are also stellar. The biggest knocks against this truck are its fuel economy and some cheap interior bits. 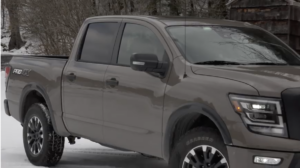 I don’t like 13mpg on premium and that’s all I’ve mustered this week.  But it’s been a bear off-road and a warrior on it which is why I really like this particular build.  It’s never going to challenge the leaders in volume but it’s a really cool rig if you want to stand out from the crowd.