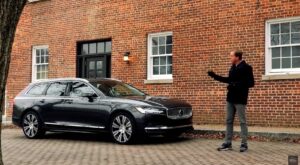 Depending upon which part of the world you inhabit, cars like this are referred to by all sorts of names but I love that Volvo hasn’t run from the term ‘wagon;” a word that strikes fear into the hearts of most automotive marketing departments.  After all, they’re part of their DNA and they still build them superbly but with way more style than ever before.

The V90 is Volvo’s flagship wagon.  It’s elegantly long, svelte, and beautifully Scandinavian.  But you don’t see many of them like this, and by that I mean without the Cross Country specification.  This is the less rugged V90 and for the 2021 model year its appearance has been refreshed and it looks absolutely perfect.  In Platinum gray with optional 20” wheels the V90 emits an air of estate gracefulness. 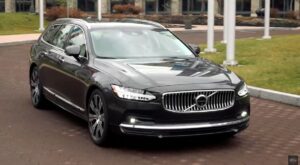 There’s a new front fascia with an updated grille and a restyled appearance from behind, including taillights that sequentially light up as you approach.  Subtle changes for sure but man, this car is sharp. 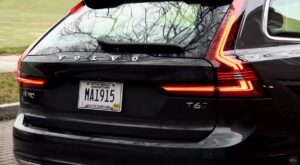 Specifically, this is the V90 T6 AWD Inscription.  To break down that alphanumeric mumbo-jumbo, models preceded by a V are wagons, the 90-series vehicles are their largest, T6 designates that it’s got the racier super and turbocharged 4-cylinder engine, with this motor all-wheel drive is standard and the Inscription trim is for those who desire a V90 with a more luxurious persona as opposed to the R-Design which plays sportier. 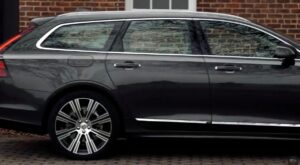 Both are priced from $53,440 including destination which is for a front-wheel drive T5 model.  This one however is loaded with lots of stuff I wouldn’t want to forgo, such as the Climate Package with its heated steering wheel and heated wiper blades, the Advanced Package which includes a small and not particularly vibrant head up display but more importantly to me a surround view camera, the impeccable smoothness of the adaptive air suspension and a $3,200 Bowers and Wilkins sound system which flaunts 19 speakers and various sound fields for mind-blowing acoustics. 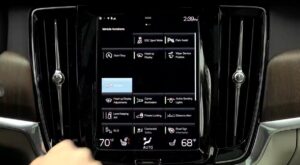 This car is also equipped with massaging front seats with numerous programs and intensities and an advanced air cleaner that monitors, displays and eliminates fine particulate matter in the cabin – a feature that’s more relevant than ever before.  MSRP is $67,640. Out of curiosity, if you build out a V90 Cross Country with these same features it costs $100 more. 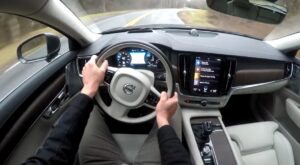 I love Volvo’s pair of wagons but this is the first time I’ve driven the V90 without the Cross Country treatment which translates into a car that rides 2” lower.  Coupled with the optional air suspension and upsized 20” wheels, the drive is refined and luxurious while at the same time agile and confident.  It’s a beautiful blend of comfort and athleticism befitting a Volvo Inscription model.  And though it sounds a little funky, Volvo’s T6 motor moves this wagon along quite nicely with a dynamic setting that puts that supercharger to work. 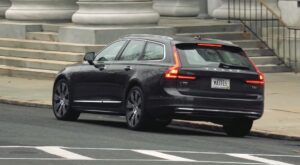 This is not a sport wagon – though with the optional $1,300 Polestar Performance upgrade it could be – yet its drive is quite capable when the road is no longer straight.  The steering is superb; precise with a light touch which is how I would describe the car as a whole – it feels unburdened by its size and its lowered chassis creates greater connectedness to the road. 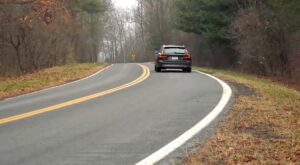 With its 316 horsepower and 295pound-feet of torque it’s a fun car to whip around and with selectable drive modes affecting everything from the 8-speed auto to the suspension control, it’s a car that always matches your style. 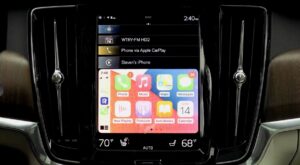 The Sensus system needs wireless phone projection and a larger screen.  9” seems a little small in here nowadays.  And though I’ve never loved this setup, I’ve come to understand it over the years but I still find myself swiping in the wrong direction sometimes trying to find what it is I’m looking for…like AM radio which actually doesn’t exist.  And the 360 degree camera view needs an easier access button. 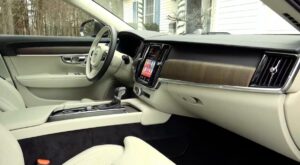 As an SUV replacement the V90 offers some advantages – like a much lower roofline for loading toys as long as you opt for some load bars, an easier to load cargo area which here comes with a foot-activated liftgate and a nifty automatic cargo cover, and mileage that’s 14% more efficient than an XC90, rated here at 25mpg in mixed driving. 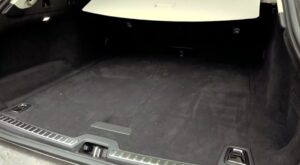 There’s considerably less luggage volume but this space is midsize large and the rear seats offer up big leg and headroom. 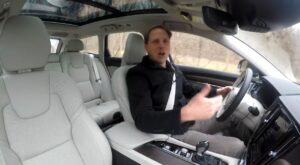 Did you know that Volvo offers integrated booster seats?  I wish I had these when Maddie was little. 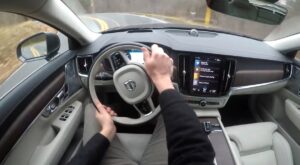 It eliminates the heated rear seats as part of the Climate Package but if you’ve got little ones it’s worth it. 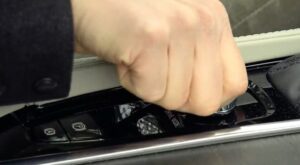 Another feature that I’ve come to enjoy is Volvo’s Pilot Assist which allows for some brief hands-free driving.  I would simple alert shoppers to the fact, however, that Volvo’s controls are a bit quirky and it’ll take time to learn and warm up to them.  If you’ve never driven a modern Volvo you’ll initially be lost in here. 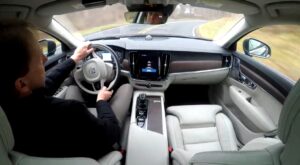 The V90 is the modern wagon at its best doing it in a Scandinavian style that makes it a distinguished choice.

Asking 5-Star Hotel Guests How They Got Their Supercars

How to get a free Bugatti