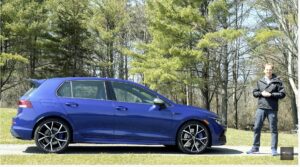 Posted By: Adminon: May 18, 2022In: Test DrivesNo Comments
Print Email

The vaunted Golf R; the pinnacle of performance for VW’s humble hatchback. 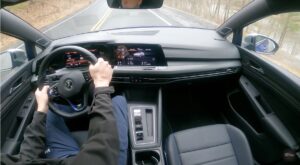 I’ve tested every iteration since it arrived here in 2008 and have fond memories of each drive. And now for the first time in 7 years Volkswagen has redesigned this rascally rabbit for an even higher degree of handling and fun new drive modes. 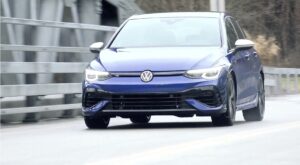 Akin to the midsize family sedan, the hot hatch segment was once a big deal.  These were cars that bolstered a brand’s reputation and street cred but nowadays?  Not so much. 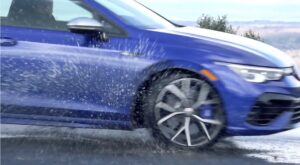 But for the enthusiast crowd, the allure of a speedy little 5-door hasn’t waivered which is why Volkswagen is leaving the base Golf off of their American car menu and instead is exclusively importing the GTI and Golf R; the models the drivers want. 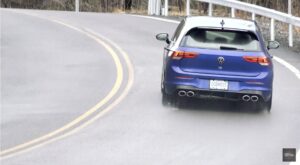 And this all-new Mk8 keeps to the Golf R’s tenets of being fast, glued to the road, fun-to-drive and within financial reach of mere mortals. Don’t worry manual lovers; 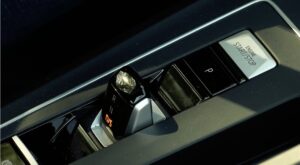 a 6-speed is still available but this DSG automatic-equipped Golf R with all of its features as standard carries an MSRP of $45,885. 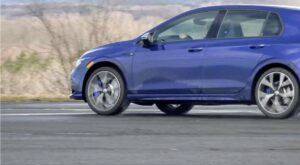 It only comes in 3 colors and if you’re shift-for-yourself curious the stick costs $800 less, delivers 15 fewer pound-feet of torque and loses 3mpg. 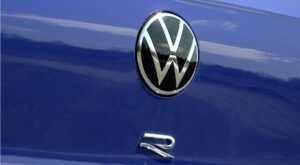 If you were expecting radical changes here you’ll be disappointed.  When compared with the 2019 Golf R – the last model year sold here – the spec sheets are nearly identical.  But that doesn’t mean the updates that have been made aren’t significant. 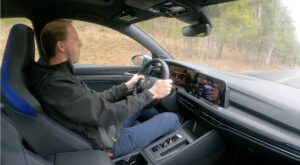 First off, there’s more power from this enhanced 4th gen 2.0-liter turbocharged engine; with 21psi of max boost it produces 315 horses as compared with the previous 288 along with 295 pound-feet of torque, up from 280.  Weighing only about 100 pounds more, acceleration is brisk with a launch control feature helping to take it from 0-to-60mph in only 4.7 seconds on premium gas.  And the other mechanical headline is the dynamic torque splitter on the rear axle, sending more power to the wheel on the outside of the corner creating a go-cart-like turn-in that can be felt even at mundane speeds.  And taking advantage of this new torque-vectoring all-wheel drive system the Golf R introduces a Drift Mode among the numerous other available driving modes – even one that caters the car to the Nurburgring’s north loop. 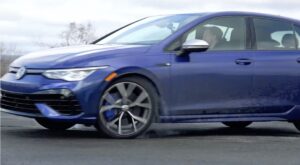 Because winter weather is still in play here in upstate New York – though not this week as it turns out – this Golf R arrived with a set of performance winter tires instead of the standard summer rubber so the overall experience hasn’t been quite the same but drift mode is fun, making wheelspin and oversteer easier to achieve in a controlled, private setting.  And if you slide too far out ESC automatically reels you back in. 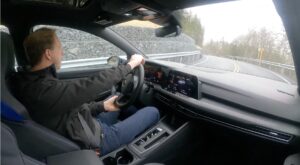 You can choose the drive mode here or over here on the steering wheel.  The only odd thing is that the car defaults to Sport mode on startup and not Comfort which includes excess engine sound you don’t necessarily want first thing in the morning.  The adaptive chassis control, drivetrain, steering; they’re all tied to the drive modes or you can customize your own settings.  And between the differential lock, all-wheel drive and torque vectoring the Golf R has every trick up its sleeve to keep the car pointed where you want it to go.  As for the ride quality, the suspension settings automatically adapt to the road or can be locked into soft or firmer tuning if you so choose but either way, the Golf R provides sophisticated forgiveness to rough roads with a high-degree of comfort.  The only exception to this is if you have a single episode impact such as a pothole which then feels and sounds like the chassis is breaking. 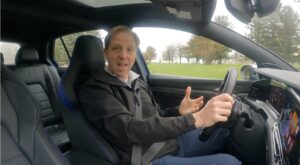 I’ve put lots of miles on this one and from a performance standpoint it is exciting but not quite as much as I imagine it would be with the stick shift.  That’s not so say the DSG isn’t quick and smart because it is and of course you can paddle shift which adds control and engagement but the Golf R is the kind of car that’s made for a manual. Still in all, the new torque vectoring rear axle, the locking differential and fun new drive modes make each drive unique with go-kart-like turn in and a backfiring exhaust note you control with your right foot.  As it turns out the winter tires on this tester haven’t been needed this week and ding the handling and ride comfort and increase cabin noise but the Golf R is a hoot while still comfortable and fuel efficient enough to be driven every day. 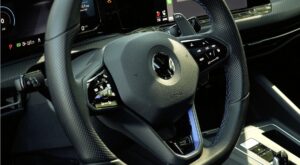 The Nappa leather sport seats are simple in their controls with full power on the driver’s side and partial power for the passenger.  They look great and hold you in place without being intrusive.  And the head-up display let’s you keep your focus on the road. 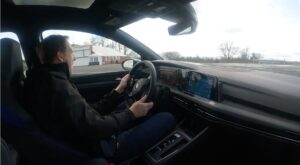 The interior is a clean design with very few buttons.  Now, that’s not necessarily a bad thing…Volvo pulls it off quite nicely…but when the computer processor is this slow it just doesn’t work.  Climate controls, drive modes, pretty much everything you want to access quickly in order to get in and go is stuck behind this laggy screen.  And the touch functions up here aren’t illuminated so at night it’s either steering wheel or voice commands. So, in general, from the driver display over to this one, the electronics are a letdown.
As a rule of thumb, if you can’t beat the speed of a smartphone – which is the benchmark of our expectations – then don’t do it.  Take the climate controlled seats and heated steering wheel buttons off of the screen.  I like the idea of touch controls but the execution isn’t quite there. 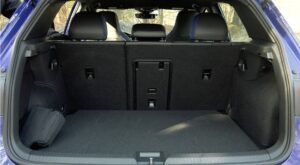 At night, the Golf R has some fun ambient lighting choices that provide visual pop and there’s some R welcome lighting to greet you.  It really looks great in here after dark.  The driver display is highly customizable with your choice of focus including mapping, performance and more.  As a highway cruiser, at least on these snows, the cabin is a little loud so you’ll have to crank the Harman Kardon in order to hear your tunes.  But you do have Travel Assist that keeps the car centered, at a safe distance and speed while on the highway though I’ve experienced a recurring adaptive cruise issue that thinks my hands aren’t on the wheel when in fact they are.  I’ve averaged better than the 30mpg highway estimate by the way so fuel economy is stellar with 26mpg estimated in mixed driving.  Otherwise, the IQ.DRIVE driver assistance features are comprehensive but don’t include a 360 degree camera. 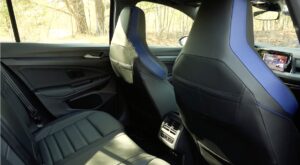 As for versatility, it’s a manually operated hatch with 25% more cargo volume than before with the rear seats up – good for holding one bicycle -, there’s a removable cargo cover and fold flat seats.  It’s low to the ground so loading is easier than in an SUV.  The rear seats are heated with their own climate controls and don’t feel claustrophobic though you do stare directly into the front headrest. 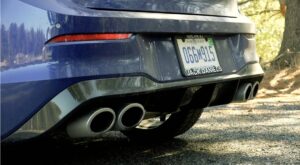 So if it were mine I’d likely choose the manual transmission so I could feel more involved because this Golf R is so good at what it does I sometimes feel like I’m just along for the ride.  Either way we should all be glad that VW hasn’t abandoned this car – a nice counterpoint to the EV revolution.

Building a Tube Front End for the 1JZ S14!

Flew to Japan to get this Liberty Walk Ferrari!

The BEST DEALS on JDM Cars in Japan! (EVERYTHING’S FOR SALE)