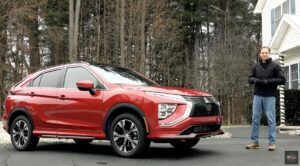 Well, if you’re like me and tend to zig when others zag, perhaps an Eclipse Cross should be on your list.  They sell in minuscule numbers as compared to the class leaders and with the updates this year Mitsu has made it more competitive. 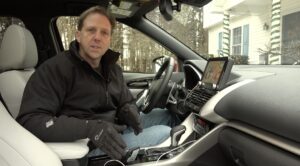 Let me start with 2 unpopular takes: 1) I couldn’t care less that Mitsu used the Eclipse name on this and 2) I liked the rear styling of the pre-face-lifted model.  So with that out of the way let’s talk about what’s new with the misunderstood Eclipse Cross.  The Outlander and Outlander Sport kill it in sales by about 4-to-1 yet the Eclipse Cross is sandwiched in between them so you’d think it would be the star of the family. 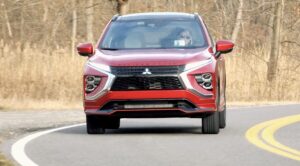 Introduced for the 2018 model year it never really caught on, mainly because it’s butting heads with some mammoths of the small SUV segment and for a small time player in this market you’ve got to do something really special to garner attention, and that apparently didn’t happen. 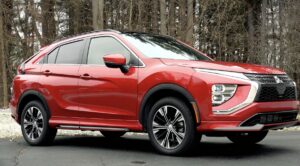 So for 2022 it grows by over 5” in length, increasing cargo capacity to bring it more in line with its rivals.  Inside there’s now a power passenger seat – which doesn’t sound like much until you realize how hard they are to come across – and a redesigned infotainment system that no longer uses a touchpad and that has a screen that’s closer to the driver. 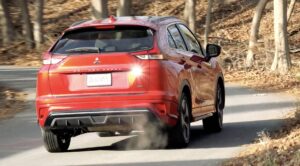 With the vehicle’s added length comes a revised suspension with retuned shocks and springs for improved ride control.  And lastly, the rear end has been restyled to remove bar bisecting the window.  The 1.5-liter turbo-4 and CVT carryover.  So how does 152 horsepower and 184 pound-feet of torque sound?  Actually, not so bad as the Eclipse Cross presents as sportier than the rest of the herd… Mitsu’s most distinguishing trait. 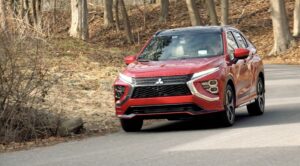 It rides firmer, sounds racier and handles more spiritedly than you might expect making this a good choice for those who don’t follow the herd. 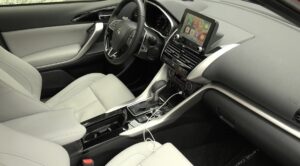 The most attractive and exclusive parts of this SEL trim include leather seats with an 8-way power adjustment on the passenger side and a heated steering wheel. 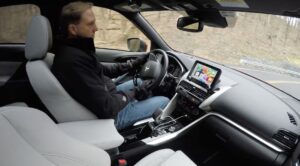 Then with the $2,100 Touring Package you get heated rear seats, an 8-speaker sound system, a head-up display, an auto dimming rearview mirror with 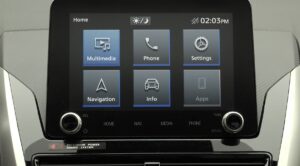 Home-Link, and adaptive cruise control.  So the well-equipped nature of this Eclipse Cross helps to assuage some if its shortcomings in other areas such as fuel economy, drivability and its overall age. 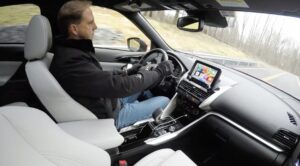 At 25mpg in combined driving the Eclipse Cross without engine start-stop or disconnecting rear axle is a loser at the gas pump, the suspension tuning and solidity of the body structure feel a little coarse and the undersized phone holder without wireless charging is a reminder of its age. 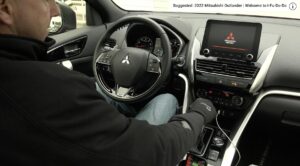 But that being said Mitsu has emptied the goodie cupboard here, delivering lots of amenities you wouldn’t expect. Beyond the aforementioned SEL-level perks there’s a head-up display, power-folding mirrors, a split pano-roof with a switch on the ceiling for the rear passengers, an impressive-sounding 8-speaker Mitsubishi Power Sound System, a 360 degree camera, all of the pertinent driver assistance features including auto high beams and an attention to detail typically eluding the brand such as this quality emergency kit and owner’s manual portfolio. 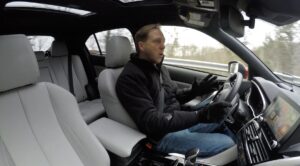 The Eclipse Cross predates Mitsu’s tie up with Nissan but a touch of that new Outlander quality lives in here. 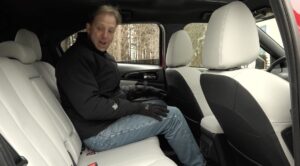 Other notables: the rear seats have reclining backs and sit very high, theater style…so much so that you have to duck getting in but you can see over the front seats, there’s no power lift-gate but there’s a dual sided carpeted/rubber cargo mat, 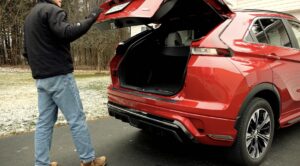 a cargo cover and fold down seats and the front seats are supremely comfortable; very Nissan zero-gravity-like. 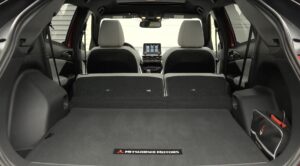 And the infotainment unit is easy to use with a smattering of cool features such as the new what3words-based navigation system which Mitsu says offers greater accuracy and specificity than street address-based systems even in areas off the grid.  CarPlay and Android Auto are here but you still need a USB cable. 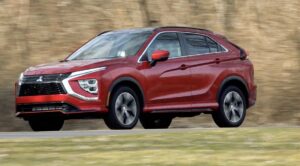 This CVT here is the kind that’s hard to embrace because it sounds pretty ugly and it’s a bit disconnected from what the gas pedal is doing but this 1.5-liter turbo is a torquey engine and moves the Eclipse Cross around quite commendably.  These EVO-esque paddle shifters however feel superfluous in a car such as this.   And Mitsu’s strong suit, the 4-wheel drive system, is a good one with 3 settings and torque vectoring, something Mitsu calls Active Yaw Control, aiding in on-road handling and any light off-road duty you might encounter.  And though nothing here is what I would call offensive by any means when compared to the competition the Eclipse Cross lacks a little bit of polish from behind the wheel. 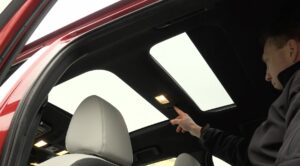 The Ecopia tires seem to be the missing link in an otherwise fun-handling small SUV but even still I like the way this moves with the rear wheel torque transfer palpable during spirited driving through the curves.  It feels unique and not like all of the others. 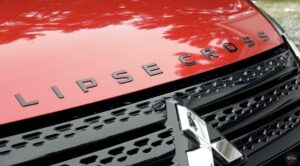 Snow and Gravel modes can be chosen for the 4—wheel drive system when your travels take you down the unpaved road. The Eclipse Cross can also tow 1,500 pounds. 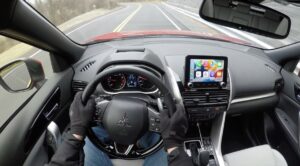 A base, front-drive ES stickers for under $25,000 while this fully-optioned, very attractive Red Diamond-hued  SEL S-AWC, short for Super All-Wheel Control, comes in at $35,020.  Give it a look if you value personalized style.