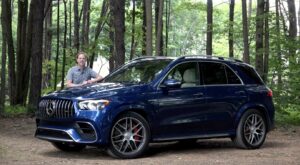 Mercedes has been producing some crazy fast SUVs over the past 20 years and this one here is the OG.  Originally known as the ML 55, this all-new 2021 GLE 63 S carries the brand’s AMG torch into a new decade of decadent speed.

Sure, you can nab a GLE 350 for around 55 grand but then you’d be depriving yourself of 603 horsepower and all of the awesomeness that goes with it.  As the top dog of the 6 model GLE lineup, the AMG 63 S blends power, prestige and panache in a mid-sized SUV wrapper. 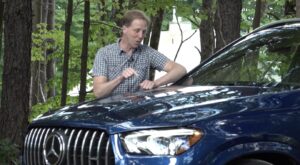 The basics are this: replacing the previous 5.5-liter V8 and 7-speed auto is an electrically boosted, twin-turbo 4.0-liter V8 generating 603 horsepower and 627 pound-feet of torque. 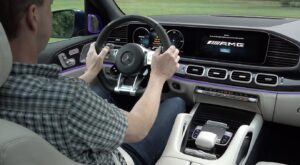 A new 48-volt electrical system can provide additional juice through a motor integrated between the engine and the transmission in what Mercedes refers to as EQ boost;  a mild-hybrid technology.  The 9-speed twin-clutch gearbox routes power through a fully variable all-wheel drive system with a locking rear differential for added traction. 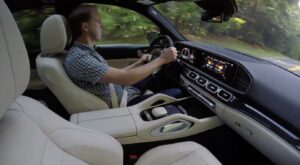 Mercedes estimates a 3.7-second 0-to-60 mph time which makes it equally as quick as its homeland competitors the BMW X5M Competition and Audi RS Q8, but not quite as lively as the Porsche Cayenne Turbo S E-Hybrid, the Alfa Romeo Stelvio Quadrifoglio and the segment’s gold medalist – the 3.5 second Jeep Grand Cherokee Trackhawk.  However, I don’t know if it’s the optional 22” wheels or some other intangibles but according to the onboard performance data I haven’t broken 4.4 seconds all week in what have been some very favorable atmospheric conditions. 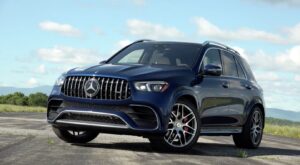 Though it’s only a 5-seater, the GLE‘s stance is ultra-wide and feels very brawny from behind the wheel with a real SUV persona and not that of merely a jacked-up sedan.  You can choose Emotive Start for some show-off rumble from the pipes or leave the exhaust partially closed for a more demure beginning.  And that’s just the tip of the iceberg when it comes to the myriad choices.  When you spend over $133k you get to direct the drive. 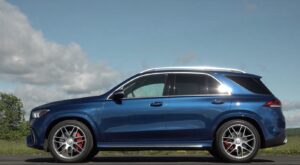 There’s almost nothing here that you can’t lord over: drive, transmission, dynamics, air suspension, you name it.  If you prefer one stop shopping as opposed to the individual controls there are numerous pre-programmed setups and then, moving beyond the mechanicals, there are various cabin themes, lighting programs, massage selections, and gauge layouts.  This is the Burger King of SUVs because you have it your way. 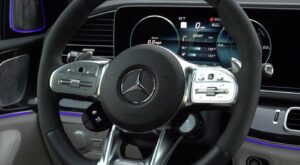 Dial up to Sport + and the GLE provides a satisfying, racy soundtrack, a heightened sense of on-demand power, a buttoned down suspension and quicker steering. 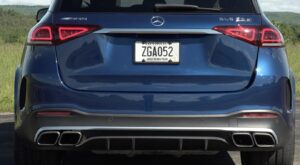 The rear Yokohama’s are so wide and the GLE is so planted that it’s absolutely unflappable in the twists and turns. Mercedes knows how to scrub out body lean and this GLE hunkers down and hustles with remarkable ease.  Its weight and size are palpable so it doesn’t feel the same as a sports car but its moves are actually quite similar.  It’s power and grace personified at speed…though a little less graceful in more mundane operations where the dual clutch is occasionally confused and hitting a rough patch of pavement can be jarring. 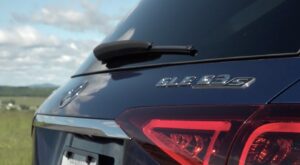 The optional Acoustic Comfort Package increases cabin insulation but the roar from these steamrollers can still be heard. 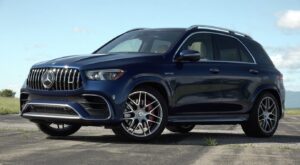 There’s a foot-activated tailgate leading to the generously sized cargo area replete with a switch for lowering the lift over height. 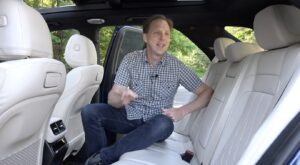 And because there’s no shortage of legroom, the lack of seat maneuverability really isn’t a big deal. 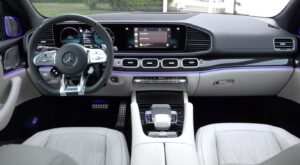 And at night, the GLE truly shines with multi-color animations that’ll have your passengers saying oh and ah.  It’s all elegant yet fun, sporty yet luxurious.  And with the addition of the Driver Assistance Package you’ll get semi-autonomous features like this where the GLE drives itself with limited steering wheel interaction and even changes lanes for you: not as good as Cadillac’s Super Cruise but pretty cool nonetheless. 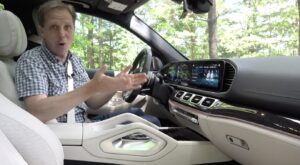 I do which however that the around view monitor had its own dedicated button.  There’s also no wireless CarPlay in here and there are only USB-C ports so be prepared for cables and adapters…something BMW did away with the need for years ago. 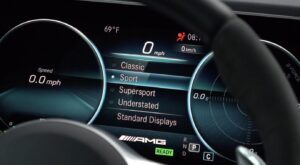 With a base price of $115,000 you’ll be able to secure some exclusivity with this one for sure.  Official EPA estimates have yet to be released but I’ve averaged about 16mpg which seems on target.  And yes, there are Sand and Trail modes to prove that this is more than just a speed machine but wearing these shoes?  No thanks.  A little gravel is all I’ve taken on.

With a top speed of 174mph and all of the wow factors like heated and cooled cup holders and headlights that turn on like pulling back a curtain, the GLE 63 S is for those who go all in on life and have the means to do so.