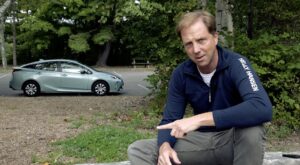 It’s been 3 years since my last Prius test drive and since then Toyota has added this AWD model which got me to thinking about my experiences with the Prius over the past 20+ years.

I remember the first time I drove one was in Albany back in the late 90s on the Prius media tour before it went on sale here in the states.  It was a right-hand drive model which was new to me and there was a lot of buzz surrounding it. 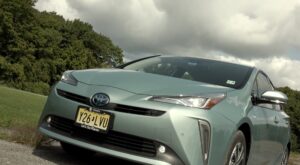 And then in 2009 I was in Orlando for the launch of the 3rd gen Prius where I partnered with the late, great Karl Ritzler in an MPG competition against other journalists and we won which was pretty cool.  But the best part of that trip was that the Celtics were staying at our hotel and I got to meet a bunch of the guys including a young, up and comer named Rajon Rondo. 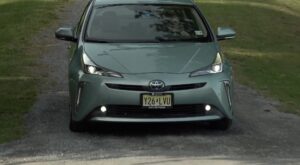 A quick look at my YT channel shows that I’ve got 8 Prius vids up and I’ve actually driven far more than that.  So the 2 of us have a long history and we both share a current conundrum…getting older and trying to stay relevant. 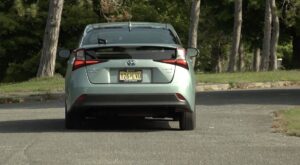 If you believe the news, a torrent of electric cars is coming soon.  And not “electrified” cars but true EVs with only batteries and electric motors.  If that’s accurate, where does it leave the old-fashioned hybrid like this Prius? 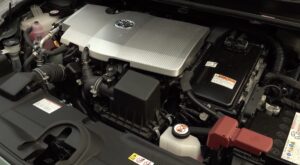 The hierarchy goes like this: mild-hybrid, full hybrid, plug-in hybrid and EV.  The Prius is a full hybrid so it can do some limited EV driving but mostly leans on its small gas engine for propulsion, combining gas and electric power to give this new AWD model a stellar 50 miles per gallon.  Installing another electric motor to drive the rear wheels provides on-demand all-wheel drive, though limited to speeds up to 43mph.  It automatically activates as you pull away from a stop up until 6mph and injects an extra 40 pound-feet of torque and 7 horsepower into the equation.  But unlike the lithium-ion powered front-wheel drive Prius, the all-wheel drive car uses old-school nickel-metal batteries.  Why? Because they perform better in colder temps. 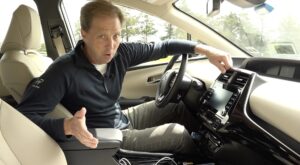 I’ve spent a good amount of time in Vermont over the years and if you’ve ever been then you know 9 out of every 10 Vermonters drives a Prius.  But that climate and those roads are not exactly kind to the Prius so this all-wheel drive model should be a boon there and throughout the northeast where some added traction is a good thing. 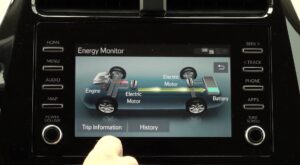 AWD eats away at a little of the Prius’s cargo space but it’s minimal.  You can watch the torque distribution on this screen up here but it’s too early for snow in these parts so I’ve been taking the Prius on some unpaved trails and the like and honestly can’t tell you if I’ve ever noticed a difference.  But swap out these little 15” eco tires for some snows and I imagine you’d have an added layer of beneficial help during winter driving. 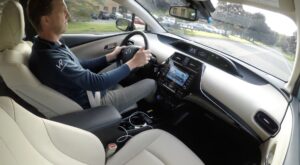 New for the 2020 model year is a 7” touchscreen on specific trims such as this higher end XLE model, Apple CarPlay and Amazon Alexa integration on all grades as well as putting the Toyota Safety Sense P system in all cars.  The all-wheel drive option comes in 2 trims: LE and like here XLE.  Pricing starts at around $28,000 while this one with the Advanced Technology Package including a heads-up display and swiveling headlamps, checks in at $31,429. 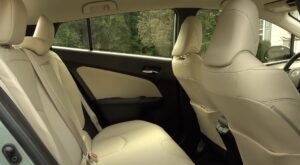 The Prius sometimes gets a bad rap for having a soul sucking driving experience but that’s not true. It drives similarly to a number of small, mass market cars just with a hybrid powertrain. For me, the plug-in Prius Prime is where it’s at in the Prius lineup but if it’s all-wheel drive you’re after the plug is not an option. But here’s the reality of the situation – the Corolla Hybrid is better and cheaper than both of them. 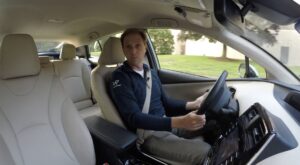 There are various drive modes, a forced EV mode for slow speed driving and this wacky shifter.  But there is absolutely no need for this beeping each time you put it in reverse.  There’s no sat radio either and the placement of the USB port in here, the wireless charge pad here and no wireless CarPlay makes for a messy center console.  Sorry: no Android Auto.  But I do like the energy monitors and the funky gauge layout still works for me in a Prius kind of way.  This car also has adaptive cruise control and steering assist but it feels rudimentary as compared with other cars I’ve tested. 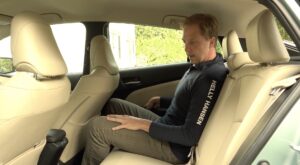 Space is decent with completely usable rear seats which now include 2 USB ports but no HVAC vents.  And that leads to my overarching thought about the Prius’s interior – it feels cheap. 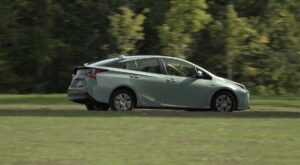