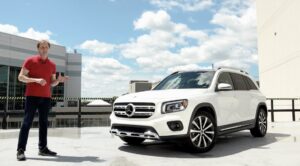 Posted By: Adminon: May 24, 2020In: Test DrivesNo Comments
Print Email

Mercedes has just added their 3rd 3-row-capable SUV and it’s their smallest.  Slotted between the entry-level GLA and compact-sized GLC is the all-new 2020 GLB.

Competing with the likes of the BMW X1, Range Rover Discovery Sport and VW Tiguan, Mercedes now has their right-sized SUV.  And it’s priced right, too.  Starting at $37,595 including destination, the GLB is going to garner a lot of attention from those who may have never considered the brand because they thought it was cost prohibitive. 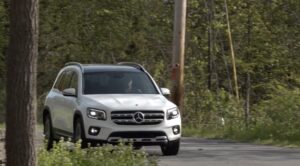 To start, there’s essentially one model: the GLB 250 with or without 4-wheel drive.  Like the rest of Mercedes’ compact car family, it’s powered by a 2.0-liter turbo-4 driving the front wheels.  When equipped with 4MATIC and placed in off-road mode, the power split can be locked at 50:50 for better traction though it normally goes about its business at 80:20, front to rear.  An 8-speed dual-clutch transmission with Sport and Eco settings and paddle shifters works the gear changes.  Gas mileage of this model is a true 26mpg in mixed driving on premium fuel. 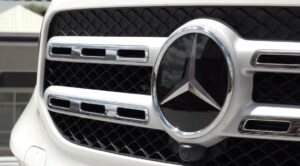 But from a styling standpoint the A-Class, CLA and GLA are – how shall we say it – aesthetically challenged.  And unfortunately the GLB can’t escape its family genetics.  It looks like it was destined for a lesser brand though I have to say this Polar White is putting up the good fight. 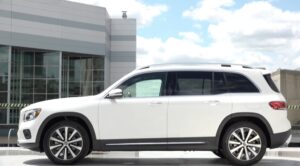 Despite its notable 8” of ground clearance, the step in height is car-like easy yet the GLB exudes a brawnier SUV vibe when you’re behind the wheel so kudos to Mercedes for blending these sometimes disparate though desirable traits.  The faux leather seats both front and rear are rather flat and thus lack the sculpting to hold you in place.  And with a punchy 258 pound-feet of torque available there’s more than enough gusto to toss you around. 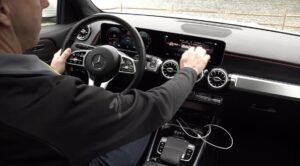 Attention is immediately drawn to the big MBUX screens which extend from the area in front of the driver over to the center console.  That’s Mercedes’ name for their latest infotainment system which is packed with cool features. 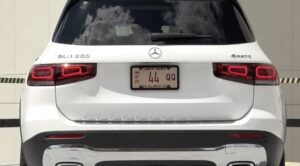 As equipped, this GLB is handful for first time users.  There’s a lot of new tech in here, most of which I’ve already been introduced to, but a new owner is going to be spending significant time in their driveway going through it all.  Though it’s really cool, it’s not at all intuitive.  And taking a page from Porsche, all of the GLB’s good stuff is optional. 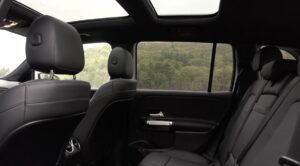 This is part of the $1,650 Premium Package.  It can be controlled via improved but still less than natural voice commands, this touch pad, touchscreen or these little touchpads – the one on the right for the center screen and the one on the left for the 3 pods. 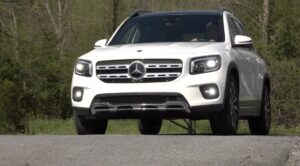 After some time you start to fall into a rhythm of efficiently accessing what you’re looking for but even for me there are still times when not even trying seems like the best option. 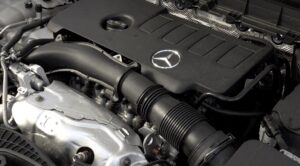 This particular GLB checks in at just under $52,000 because Mercedes makes almost everything, even the garage door opener, optional. 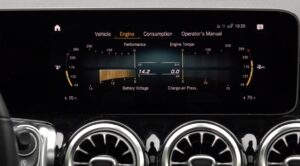 But you’d be remiss to not spend the $310 needed for the 64-color ambient lighting…it’s spectacular and at night makes a big impression…a must have item, for sure. 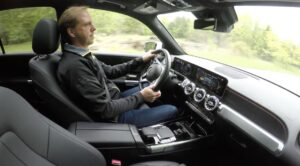 Other notable extras in here I’d definitely advocate for are the panorama sunroof, heated steering wheel, satellite radio, heated front seats, blind spot assist and dynamic radar cruise control which are bundled as part of a bigger Driver Assistance Package, and all of the multimedia goodies which includes a cool augmented reality navigation function and smart key features. 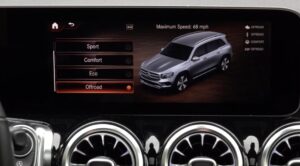 The optional 3rd row allows for seating up to 7 and adds $850 to the price but my tester goes without. 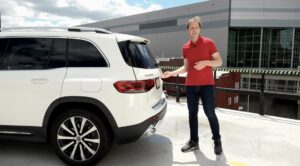 The liftgate can also be foot activated and leads to an appropriately sized cargo area with an underfloor storage compartment and elastic bands on the sides to secure small items.  There are no remote levers to drop the 2nd row seats, however.  These placements both slide and recline for excellent leg and headroom so again, the GLB’s sizing hits the sweet spot for passenger comfort, cargo and maneuverability.  There’s no wireless charge pad in my tester though and all of the charge ports are USB-C so you’ll need adapters if you’re an iPhone guy like me.  There’s also no wireless CarPlay – advantage BMW. The personalization options are very cool though with various themes to choose from and a highly configurable gauge display. 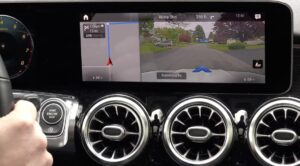 The GLB doesn’t make a ton of sense to me.  I like the size but its over $50,00 as-tested price doesn’t jive with its less than personality.  Though not as homely as the GLA, the styling comes across as a little cheap, the engine not as refined as it should be and even with the adaptive dampers the ride quality has an unwelcomed edge to it.  Compared to the similarly priced Highlander I recently tested, the GLB’s drive comes across as a little crude. 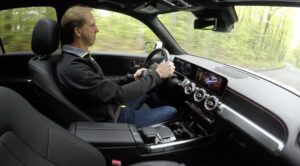 It certainly feels quicker than its 6.9 second 0-to-60mph time and from inside it convincingly makes some racy sounds. 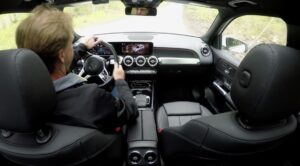 And though I understand these small Benzs are engineered with a more youthful spirit, the GLB lacks polish – from the overly eager powertrain with its non-traditional automatic transmission to the occasionally crass rear suspension I simply need more couth at this price. 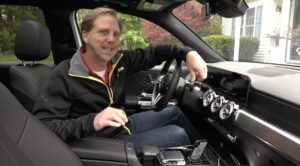 Nevertheless the GLB should resonate with badge shoppers who are willing to shrug off some shortcomings in exchange for luxury car membership.